Rākau Tautoko works with communities across Auckland, but its contribution to public welfare is being felt by other social enterprises and not-for-profits across the globe 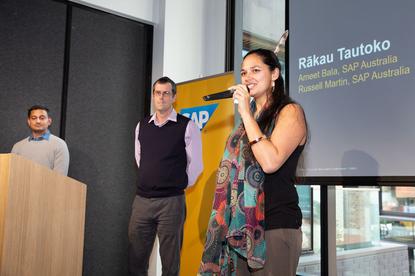 Rākau Tautoko was launched in late 2016 as a small Auckland-based consulting social enterprise.

“We take on community projects that will make a difference for whānau in the communities we work within,” says its founder and lead practitioner Tara Moala.

‘Rākau Tautoko means tree and support, it refers to the branches of a tree reaching out, growing and gaining strength,” she explains.

“And, like the tree outside the Auckland Domain, it can only grow large and strong because of the incredible strength of the roots.”

“We do not have a base,” she discloses, as their practitioners get invited to communities.

Social Sabbatical is a pro-bono programme, which matches SAP employees with social enterprises that will benefit from their specialist skills and resources.

The programme entails SAP staff to spend to immerse themselves for two weeks with the social enterprises.

Moala says a member of SAP’s NZ team worked with them, and told them they would benefit from a project management tool being used by businesses across the globe.

She says this was the first time they have used a project management tool.

They spent one day working on the tool, Ruum, the project management as a service by SAP, and shifted some of their projects onto it.

“Since then, every single project we do, we do it from there [Ruum],” Moala says.

“Our community development practitioners are active in even more spaces and places,” she adds.

“The flexibility of Ruum, to be able to invite all of our different leads, collaborators, and community members onto a simple platform, add our plans, documents, images, and track our progress, is invaluable for efficient delivery.”

She notes that they have been using Ruum for about nine months and such has helped relieve her of the administration work she used to do.

“The biggest thing is that people have deadlines. I don’t have to chase them up, they get emails automatically.”

According to Moala, she used to spend half a day trying to get all of these documents together, including the printing and planning, at the beginning of a project.

She says she now has access to all information on their projects, provide input when needed, and see how the different practitioners are using the platform.

“As a startup business, often we don’t have the resources, and are stretched trying to do things, so being able to cut out a bit of administration was useful,” she discloses.

Moala reckons she now focuses the majority of her time on developing the business, instead on internal processes.

As it turns out, the impact of Rākau Tautoko now expands beyond Auckland.

The social enterprise worked with SAP to support the development of an NGO-specific version of the software.

This version is now open for approved not-for-profit organisations working on the areas of sustainability, universal education, diversity in technology, and responsible development of artificial intelligence.

“When we started building Ruum two years ago, the idea behind it was to simplify key work,” explains Florian Frey, co-founder and chief customer officer, Ruum by SAP.

He says he has been working with SAP for about 10 years across, and in various roles, from sales, consulting, and product development.

“Everywhere I went, I saw that there are highly experienced, highly motivated professionals, who unfortunately have to spend a proportion of their time coordinating all their emails and reporting slides.

“We had to find ways to simplify coordination and teamwork,” says Frey, who developed his idea for the software through SAP’s internal acceleration programme.

“We (with Ruum co-founder Stefan Ritter), were lucky enough to secure an investment to build a new product from scratch and work on an idea.”

The SAP innovation programme allows employees to act as entrepreneurs, he states.

The result was Ruum, now the flagship collaboration and workflow management platform of SAP.

Ruum is used within SAP and is estimated to have saved the company more than €1,600,000 and nearly 50,000 hours of administrative work in just five months.

More than 2000 companies are currently using Ruum by SAP, including Beiersdorf and BASF.

“Our customer base was larger organisations,” notes Frey.

“But then, we saw a lot of smaller companies were signing up for the tool."

He relates that one day, he got an email from the Social Sabbatical team from SAP in New Zealand.

“They were looking to use our tool (for Rākau Tautoko), which was an amazing story for us.”

According to Frey, “That triggered the whole idea of creating a version for not-for-profits.”

This also evolved into the Ruum for Good programme, wherein approved not-for-profit organisations get free access to Ruum professional and discounted access to Ruum for enterprise.

He says today, there are about 200 not-for-profit, social enterprises, and educational organisations using the software.

He points out that the benefits for SAP and the not-for-profit organisations apply both ways.

These organisations are a great source of feedback, as we want to build an “amazing UX tool”, he states.

He says one of the things they built into Ruum was an AI project manager.

This virtual project manager takes "all of the repetitive boring tasks", such as sending team members reminders, and informing them of changes.

He discloses that among the users of Ruum is a community sports team from Germany, and his former university in Germany.

Frey adds that being involved with Ruum for Good also motivates his team at SAP. “Whenever we talk about social enterprises and not for profits using our tools, I see the pride in the eyes of all our team members.”

“I think opening your technology for not for-profits is something everybody should aspire for,” he says, on a message to his industry colleagues.

“It is something that pays off for our people, for the world, and for business.”