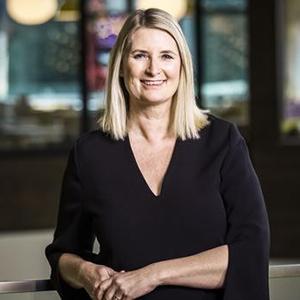 Sonya Crosby says when she first interviewed for the role of chief innovation officer at SkyCity, her then CEO (Nigel Morrison) wanted to hear three words: Data, algorithms and customer.

“All three - happily - came through in my first sentence and he was so right,” says Crosby.

“One of the biggest challenges we face is how to free up data and make it work much harder for our business.

“Our business is no different from many others, where information is held mostly in static silos of marketing, finance or operations – the real power is how this is integrated in real time to be able to support service excellence and unlock new value.

But, she says, “whenever I’ve become lost in strategy or have fallen off the tracks in delivering a project I come back to the customer.”

“The answer is always right there so planning and capturing data ‘on the go’ and putting it in the hands of different users for different purposes is critical to success.”

She says a key learning in her work is that, “Innovation will only work if the business recognises the need and is really ready to support its change – and the old adage of ‘we like change until you ask us to change something’ is very true!” she says.

Since coming into the role, she says, “I have tried, tested, failed, pivoted and now(!) successfully implemented a new strategic framework and programme of work for how SkyCity will reimagine the future of entertainment using customer-centred design and innovation to grow revenue and shareholder value.

She says projects delivered by her team include include internal cultural and process change.

We implemented the staff ideation programme designed to drive a cultural shift to become more innovative, agile and able to pivot as an organization, says Crosby.

She says there are over 500 staff ideas in the pipeline that are being actively moderated.

They also implemented the voice of customer programme which included  establishing co-design panels. There are now over 2000 customers engaged in the panel across the SkyCity Group.

We also implemented a self-service online portal across all five properties Australasia wide for our marketers to use 24x7, she adds.

Cross functional teams were formed across their sites in New Zealand and Australia. They also participated as co-founders of the Wynyard Innovation Neighbourhood which has supported industry benchmarking, share talent initiatives and future skills development.

In addition to these are specific business growth projects that drive core business benefits through improving retention and frequency of visits, says Crosby.

Last year, the first foundation pieces including prototyping for the frictionless customer service were integrated and delivered through a mobile offering that removes key pain points and enables customers to be recognised and rewarded.

She says the new approach to innovation, cross functional teams and shared responsibility is endorsed from the board down and is in the process of being fully integrated and embedded across the organisation. These include operations, ICT, risk, finance and marketing.

“This is a step change for a business which has run in autonomous siloes for many years, not just within each of the five properties across Australasia, but within every venue from food and beverage outlets, hotels, casinos, theatres, conferences and events,” says Crosby.

“Innovation can be seen as a fancy word, which conjures up visions of ‘cool kids sitting around on bean bags playing video games’,” says Crosby.

But in reality, “innovation is a very disciplined process that is about realising new value for the business via a defined and rigorous process which removes risk and builds certainty, especially when entering new territories.

“Overcoming both the silos and the cool kids perception was about being inclusive, demonstrating through doing and dispelling the myth through having the business together on the journey.

This involved establishing cross functional teams right from the get go and every step of the way, sharing the lean design process, being transparent about discovery (there are cans of worms to open in every tech project) and working together in virtual teams from prototyping through to minimum viable product where business benefits are tested. she says.

She explains cross functional teams include the business owners who will be owning the opportunity downstream along with technology solutions, delivery and maintenance – in this way, she says,  the operating framework and change management are considered throughout and handover is expected and planned for.

“We have already seen some benefits for staff in simplifying systems as we’ve moved through different iterations of prototypes,” she says.

“I would like to say here that I introduced some cool new AI technology that is changing the world, however the simple truth is that key benefits turning the wheel for SkyCity lay in solving current pain points and creating new value closer to home, she says.

For Crosby, “It starts with understanding the three C's (customer, capability and commercial opportunity) – who is our customer today (and tomorrow) and what do they desire?”  This included scenario planning and resulted in identifying whole new competitor sets, she says.

We shifted our mindset to focus on their whole experience from end to end, not just when they are with us.  We then looked at what capability we have that we can leverage (including people, technology and other assets) and/or what capability would we need to build; and (importantly) where is the commercial gain going to come from, using both internal and external data to help quantify the opportunity.  These three words became the check in point throughout the iterative design process.

“Firstly, our current and future customer is front and centre of our thinking and features right throughout.

“Secondly, we are not a hidden away lab that produces prototypes that are then ‘hospital passed’ into the business.  Rather we work in virtual teams that include both customer and operational staff with MVP being the minimum viable offering implemented and proving business benefits.

“This makes handover much more realistic and the change process is supported early on,” she says

Crosby was a part of the C-Suite and senior leadership team and presented regularly to the board.  She has since stepped into an advisory role as the innovation function becomes fully integrated within SkyCity operations.

“We are currently test piloting online forums to encourage more collaboration within different functional areas such as marketing and finance – joining up the conversation and shared resource materials across all sites.”