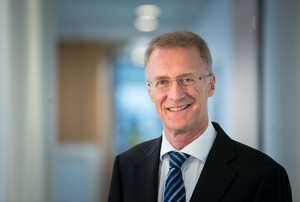 Over the past two years, Fletcher Building has taken serious steps towards transforming their business model, leveraging the benefits of the Portfolio, driving hard on performance and preparing for business in an increasingly digital economy. It is now beginning to realise the benefits from the shift and providing lessons for other New Zealand organisations.

A multifaceted Group Technology transformation programme was set up in late 2015 to drive the changes that would enable the Business and deliver on our IT strategy, says CIO John Bell.

The strategy, he says, has a simple underpinning concept - “deliver solid, reliable, and efficient technology foundations while moving our investment from run to grow, i.e. enabling our Business to differentiate and grow in the market”.

The goal of rebalancing IT efforts and resources resonated with both the leadership team at FB, and with the Group Technology (GT) members, says Bell.

This simple concept he describes, however, encompasses the company’s global operations.

The Fletcher Building Group Technology team consists of approximately 400 staff globally, made up of both permanent and contingent workers, says Bell.

“A key element of our transformation is the centralisation of Fletcher Building’s global IT resources - effectively creating a single global team from the federated business unit teams, underpinned by a major culture change that is focused on delighting our customers and making GT a great place to work” explains Bell.

The previous model was business-unit centric, chronically underinvested and inefficient, he explains. In broad terms, GT managed 72 ERP instances, 16 CRM and 21 payroll systems. There were 20 data centres and over 2300 servers.

The current environment was not meeting the needs of the business, and was impacting GT’s net promoter score. “It was time for major transformation.”

This has included initiatives such as rationalising the multiple service desks to one logical 24x7 global model, consolidating our data centres, designing a single global network, rationalising the end-user computing platform, implementing software asset management to name a few.

The implementation of ServiceNow will ensure delivery of a standard service management experience for users and greater automation across FB. All service requests and incidents are now captured and managed in the same way. Headcount has decreased and service levels and user experience are gradually improving.

“This change has aligned our service delivery functions around a service portfolio reaching across the globe, and re-organised our applications development teams into technology centres of excellence,” says Bell.

The changes represent a significant cultural change for both the IT staff and business community who have been used to dedicated embedded IT resources, walk-ups and an intimate, but inefficient, service model.

Bell says IT staff were widely consulted about the organisational changes, which resulted in a significant number of practical changes. The consultation process and preceding Town Hall meetings provided visibility and enabled full engagement from the IT teams and a deep understanding of the rationale for change, he says. Business support was also assured through multiple briefings at all levels of management.

Each of the major operational divisions that make up FB has a GM of IT assigned to them.

The GM is responsible for managing the Business relationship and works closely with the Business to develop the IT and Digital roadmaps. This extends to supporting the development of the associated investment plans, and leading business development.

Through the restructuring of GT, we’ve also introduced eight new Heads of IT roles across our portfolio of 32 companies to grow business engagement and partner even more closely, says Bell.

The new roles complement the existing GM divisional leads allowing GT to hear the FB businesses and work collaboratively on strategic investments much earlier in their development.

“We have a huge amount to do,” he says on the challenges the team will tackle in the coming year.

“However, sitting on the executive team in a capital constrained and focused team environment, ensures that prioritisation takes place and that support and help is applied when it’s needed”.

Much of the growth activities (EBIT generation enabled by technology) is currently being driven by our investment in this team, says Bell. However, the innovative, customer focused agile development practices will gradually be incorporated into all of our development teams

The Lab team is composed of 20 developers based largely in NZ and focused on delivering smart applications that drive business value.

To date, the team has processed some 800 ideas, focusing in on 24 applications developed using Agile techniques to ensure they deliver real business value. Some of the notable apps that have been deployed are FletcherSpec Pro, and the PlaceMakers estimating tool.

Historically, the business processed two specifications per month, and with FletcherSpec Pro, this has now increased to 400 per month. Turnover is up 80 per cent, says Bell.

The PlaceMakers estimating activity, on the other hand, was previously outsourced at a cost of $800 per estimate and the process took one to three weeks. With the new tool this process now takes a matter of hours, he states.

“We recently rolled out Agile and Customer Centricity training to all 400 GT staff to help drive a new way of working and increase customer focus. We’re determined to release the innovation potential of all GT staff regardless of their operational area,” he says.

“GT investment in innovation is only possible because of the efficiencies we are getting in our operations management and applications areas which is helping drive down the overall operating costs.”

Accelerate is an FB-wide change management programme with participation from the global GT staff focussed on driving customer innovation, and operational excellence.

Bell says this year, “We made innovation part of everyone’s responsibility and all staff are measured on identifying minimum two initiatives,” says Bell. “The brainstorming and Agile techniques we introduced underpin continuous improvement ensuring a pipeline of strategic and tactical initiatives that we prioritise for delivery.”

Bell also meets with the GT leadership weekly to keep their focus on driving innovations.

“The GT reorganisation and new operating model has created specialised teams - more effective and efficient than the generalist teams we had previously,” he says. “The consolidated service desk is leaner and the EUC and technical services teams are more focused.”

Bell explains historically, over 89 per cent of his team’s Opex spend was in ‘keeping the lights on’ in a very broken and inefficient model.

“The savings we’re making are being reinvested in transform and grow activities where the target is to increase opex ‘transform and ‘grow’ spend from 10 per cent to over 30 per cent.

“We’re continuing to invest significant capital to help rationalise and transformation the infrastructure and applications environment.”

Bell is an active member of the executive team, addressing them on progress of strategic IT matters that include digital investments and the Group Technology restructure.

“I allow the executive to question and challenge the investments being made,” he states.

“All GT investments are subject to a strict governance framework with a major focus on ensuring we only undertake investments that either deal with risk, or deliver genuine bottom line value.”

Bell says Group Technology has also introduced a graduate recruitment programme. Eight graduates were recruited in 2016, and this will be a regular commitment from now on.

“The initiative is designed to 'change the mix' - introduce fresh talent in tune with modern technologies and their application in both domestic and working life.”

Bell says the graduates have been appointed into permanent roles with each having a development plan and a mentor to guide their personal development.

The technology team recently completed a 'talent management' exercise where all senior or critical roles have been identified and succession plans developed.

Bell, for instance, has identified candidate successors but more importantly actively commits to the development of each member of his leadership team.

“We’re committed to driving learning and development across all staff, encouraging staff to embrace a growth mind-set” he states.

The current makeup of GT reflects the rest of FB and the building sector, and is currently heavily male dominated, albeit from many different ethnic backgrounds, he says.

Bell says Group Technology is committed to diversity and improving the gender balance at the leadership level over time – a strategy very strongly espoused across the Fletcher Building group of companies.

The Head of Digital, who is less than a year into the role, is the second female at GM level within Group Technology, he states.

“The initial graduate intake was a balance of male and female recruits from different ethnic backgrounds and this sets the tone for future hiring behaviours across GT.”

“We are deliberately looking to introduce more females and continue ethnic diversity at all levels of Group Technology.”